Last weekend brought three feet of rain to many parts of Southern Louisiana, including the state capitol of Baton Rouge. Despite the lack of national news attention, some 20,000 people had to be rescued from their homes, at least 40,000 homes have been completely destroyed and approximately 80,000 people have already applied for federal aid. This is the nation’s largest natural catastrophe since Superstorm Sandy hit the East Coast. Even though you haven’t heard much about it on the national news, whole towns like Denham Springs have been wiped out and damaged by flooding. Livingston Parish, East Baton Rouge Parish, St. Helena and Tangipahoa Parishes have all been declared national major disaster areas.

In Louisiana, and many low-lying areas of the country, mortgage companies may require you to carry flood insurance in addition to your homeowner’s insurance. The reason being is that a general homeowner’s insurance policy can protect you against wind damage, fire damage, and some other type of man-made destruction, but it will not protect you against water damage. A flood policy will cover water that flows into your house in many cases. Most people in the United States do not have flood insurance, but those that live near lakes and moving bodies of waters may carry flood insurance, depending on the “flood plain” or elevation of their land and home. As it turns out, many of the Parishes that were affected by the great rains and floods have never flooded in the history of humans inhabiting the land. Some flood policies exist in the event of a 100-year flood, or a 1 in 100 year chance that your house will flood. Well, this flooding was more like a 500 to 1,000-year flood, meaning, most people were not required to have flood insurance and would never think twice to obtain it.

Even though we don’t know the exact numbers of how many people are left homeless, we do know it is in the thousands given the number of people who have already applied for aid from the federal government (FEMA).

For those that were diligent to have both a homeowner’s insurance policy in addition to a flood insurance policy, it should be a routine process of filing claims with your insurance companies. Yes, this is generally a long process, especially when so many people are affected at the same time, but it will ensure that you can recoup some of your losses. This is a prime example of how holding multiple insurance policies such as homeowner’s, content, auto, and flood, can help you in the event of a disaster.For those without such policies, the recovery is going to be a lot longer and harder.

Mortgage lenders almost always require homeowners to buy flood insurance policies on properties in areas with a high risk for flooding, but this is not always the case. In New Orleans, since Katrina especially, almost every home must carry a flood insurance policy if you hold a mortgage on your home, regardless of where you are. The 100-year flood policy is a minimum and can range from somewhere between $200-$500 per year. I highly recommend holding one of these if you not only live in a low-lying area, such as many parts of New Orleans, but also if you live nearby to a creek, stream, river, or lake.

Government Funding for the Uninsured

In July 2015, only 20% of homes in Louisiana were covered by flood insurance, according to FEMA numbers provided by the Louisiana Department of Insurance. About 16,311 of the 137,616 homes in Baton Rouge had flood insurance, which is approximately 12%. Most of the flooding in East Baton Rouge Parish, is outside the city though.

Governor John Bel Edwards has stated that there will be money available to help uninsured homeowners recover, but it will not replace flood insurance. So, even though there is a promise, homeowners without flood insurance cannot expect enough money to rebuild from scratch. Though, this is Louisiana, and people are very resourceful and neighborly so we can hope to see recovery for everyone. But, it probably won’t be in the form of government aid. Edwards also stated that the Federal government is making up to $33,000 available for home repairs and replacements of essential household items not covered by insurance. The money must be used for “repairs and replacements needed to make a damaged home or building safe, sanitary and functional.” I’m not sure how much will be overseen by the government, but I’m sure that contractors are out there advertising already.

This is going to be a very long, difficult process. Very similar to Katrina. Maybe even worse. The federal government will award grants as “needed and warranted” and people are asked to take as many photographs of their damage, including documenting everything they can possibly document as a loss.

Have you been Denied Coverage by Your Insurance Company

Sadly, we know that insurance companies are going to deny coverage to those who suffered damages as a result of this flooding. If you or someone you know has a claim that was rejected by the insurance companies, please call our lawyer’s at Crescent City Law. We have local adjusters who don’t work for the insurance companies that can show how your damage should have been covered by your policy. From our offices in Southeast Louisiana, we can help you get the compensation you deserve. Please call us toll free at (866) 459-4478 or email us here. 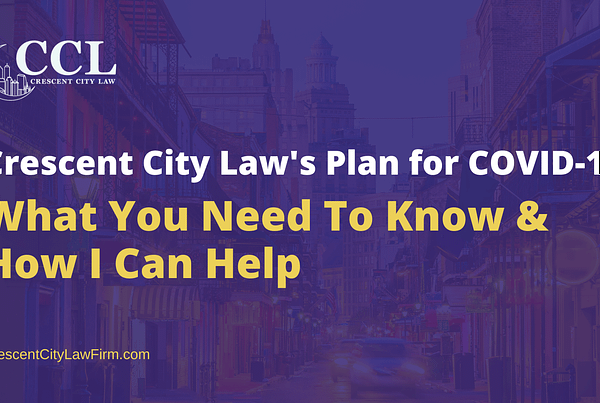 Register to Vote in Louisiana Before October 11, 2016